Due to the subjective nature of the 4 primary diagnostic criteria, some clinicians refuse to accept that the condition even exists. The reason TLJ syndrome is so commonly missed by healthcare professionals is because the pain associated with the syndrome rarely presents at the source of the disorder and as such is primarily referred elsewhere.

Lower back pain in the region of the sacroiliac joint (SI) is perhaps the most common site of pain reported by those suffering from the condition. Consequently it is often assumed that it is the SI joint itself that is dysfunctional, and not the thoracolumbar junction between the 12th thoracic and the 1st lumbar vertebrae. In fewer cases, the dysfunction actually occurs between the 11th and 12th thoracic vertebrae.

The TLJ is the transition site between the thoracic and lumbar regions of the spine and as such it is the point at which the fluidity of movement between these two spinal segments most often breaks down. The structure and function of these adjacent spinal regions does differ somewhat; the lumbar spine for example has almost no rotational ability, while the thoracic spine is able to rotate because the facet joints in this segment are aligned in the frontal plane, as opposed to those in the lumbar spine, which are aligned sagittally.

The 11th, 12th thoracic, and the 1st lumbar vertebrae are the most common sites for spinal trauma. When the rotational force (torque) from the thoracic spine passes through into the lumbar vertebrae, as would be the case during many twisting and turning actions, the surrounding tissues must absorb this force to protect the lumbar spine from also twisting or rotating. The more times these motions are repeated, especially under load, the greater the risk of irritation and inflammation in the surrounding spinal structures.

With Maigne’s syndrome, the pain most frequently presents only on one side (unilateral) of the spine and rarely, if ever, affects both sides simultaneously. Additionally, sufferers of the syndrome almost never complain of pain affecting the TLJ itself. The pattern of pain usually radiated along the pathway of the nerves that leave the spine at the TLJ. [1] 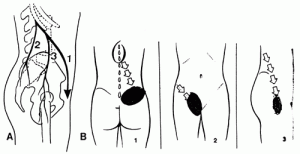 The primary groups of nerves exiting the TLJ include the anterior ramus, posterior ramus and the perforating lateral cutaneous branch of the plexus lumbalis. [2]